The team at Millars have retained the skills and knowledge to enable us to service and repair auto electrical equipment. The electrical wiring on pre-war chassis generally used rubber as the insulating covering, which in turn was clad in cotton covered sheaths.

The rubber insulation is likely to have become hard and brittle as soon as the wire is bent the insulation will crack and breakdown. Alternatively, the rubber may have absorbed oil and petrol fumes, turning it into a soft semi-fluid covering, in which the copper conductors are no longer protected from contacting other wires. 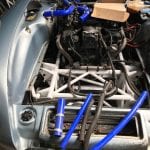 The most important job to be done on any car in the interests of it’s preservation and reliability is the renewal of the electrical wiring. We can rewire your car using colour-coded PVC covered cable. Alternatively we prefer to use a modern PVC insulated cable which is then covered with an appropriately coloured cotton sheath. This has the appearance of the original wiring with the benefits of modern materials.

At the same time as renewing the wiring, provision can be made for additional functions which have become almost a pre-requisite of modern motoring, such as flashing turn indicators. It is unlikely that the lighting available on an old car will ever compete with a modern car but it is possible to incorporate improvements or enhancements.

To find out more about Electrical Overhaul in Berwick, Polegate, get in touch online or call us directly on 01323 870598

We also supply the following services

Websites for the motor industry from